The ultimate in elegant sports style lives on with Vespa Sprint and GTS Super.

Vespa Racing Sixties is a special series inspired by the classic and evocative aesthetic of 1960's racing.

With race competitions in which the speed and battles went hand in hand with the class and elegance of the vehicles and riders, the 60s were a legendary period in the history of racing and motoring.

And it is those elegant sports values that inspire the new Vespa special series, comprising the new Vespa Sprint and Vespa GTS Super Racing Sixties.

The brand-new yellow and red graphics stand out on the chassis, green and white respectively, of the grittiest models in the Vespa range, the Sprint (with its 50, 125 and 150 cc engine size) and GTS Super (125 and 300 cc engine size).

In addition to the evocative colour scheme, a brand-new seat, golden wheel rims and matte black details, all of which give life to two aesthetic proposals that stand out for their elegant sportiness, the first (yellow paired with green) more classic and the second (red with white) offering a more dynamic, fresh and modern mood.

Inspiration for the Vespa Racing Sixties series comes from the gentlemen riders races of the 60s, a world in which freedom of expression extended as far as the vehicle customisation arena. During that decade, riders were fuelled by a great spirit of independence and autonomy, determinedly choosing their team, the races in which to compete, and even the aesthetics of their vehicle, particularly in terms of its colours, graphics and materials, which had a fundamental role back then. Colours and graphics would often reflect a sense of belonging to one's country of origin, graphic details and colour schemes selected to ensure one's private team had a distinctive and easily recognisable look, a visual tribute to the brands that chose to support sports teams on the road to victory.

The style choices adopted for the Vespa Racing Sixties special series echo the feats of legendary sports personalities, conjuring up memories of legendary circuits such as the Monaco or Monza Grand Prix tracks, or historic championships like the Targa Florio. Nostalgia is kept to a minimum though, the model instead riding the spirit of the time, as only Vespa knows how. With its new liveries, the Racing Sixties special series offers classic style with a sports twist, mirroring a tailor-made approach in which material and tactile values such as colour, material and texture are rediscovered, with a touch of exclusivity in the details, an expression of appreciation for bold simplicity.

Classic sportiness is guaranteed with both the Vespa Sprint and Vespa GTS Super thanks to the pairing of simple colours such as yellow and green, or red and white, and the clean graphic lines that enhance the sides and front tie. An added style touch comes in the shape of the matte black finish of the passenger grab handle and footrests, the front and rear light setting, the silencer cover, the rear-view mirrors, the onboard instrument cluster base and shield trim, as well as the crest on the front mudguard of the Vespa GTS Super Racing Sixties.

Vespa Sprint and Vespa GTS Super Racing Sixties shed their classic chrome plating to give way to the gold metallic finish of the wheel rims, and gain exclusivity and prestige thanks to the new seat in soft, velvety nubuck, coated in PVC to protect in bad weather and complete with artisan-style stitching reminiscent of that seen on 1960s sports cars, and the dedicated plate, these last two features a tribute to the exciting and engaging world of racing. 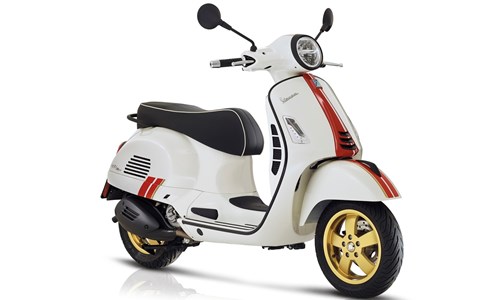